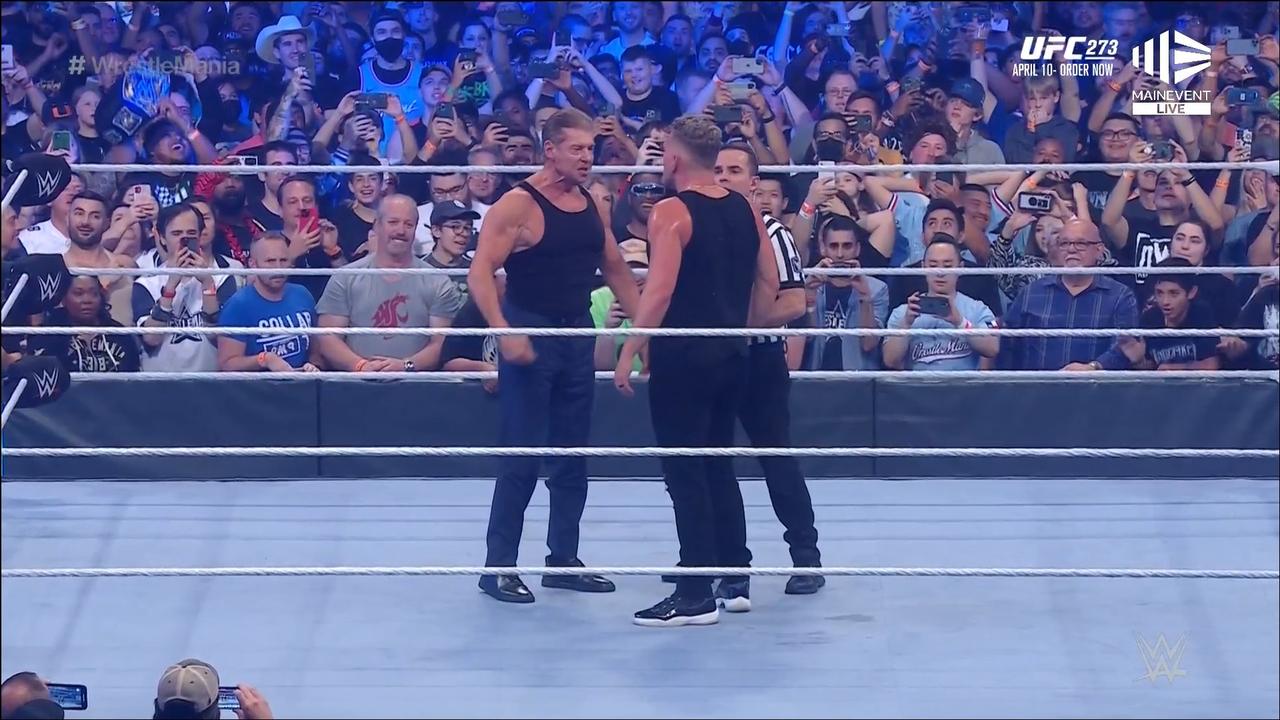 Vince McMahon has returned at WrestleMania 38 in a “disgusting act of sportsmanship” that has stunned the wrestling world.

WrestleMania 38 has begun with a bang on a night when the world will get to see “the biggest match in WrestleMania history”.

Roman Reigns and Brock Lesnar are set to rumble in a historic unification match at AT&T Stadium in Dallas.

Steve Austin has taken out Vince McMahon and WWE debutant Pat McAfee in a bonkers co-main-event match that has left jaws dropping across the wrestling world.

Austin came from nowhere at the end of a match where the WWE chairman ambushed McAfee minutes after the former NFL punter had pulled off a miracle in pinning Austin Theory in his debut match.

McAfee, one of the most popular sports commentators in the United States, took Theory down — much to the dismay of McMahon, who was sitting ringside.

When McAfee then went and showboated in front of the WWE icon, McMahon responded by stripping off his suit and stepping into the ring.

After exchanging some heated words with McAfee the pair prepared to rumble — only for Theory to fly into the ring and hit McAfee from behind. McAfee was then tripped up by Theory in a second cheap shot.

A WWE commentator said on the TV broadcast: “That is one of the most disgusting displays of sportsmanship I’ve ever witnessed”.

That’s when Austin stepped out from the locker room to confront McMahon for the underhanded attack.

Austin took McMahon down with a trademark stunner and then proceeded to celebrate the moment by sharing a beer with McAfee in the ring.

However, Austin then turned on McAfee and executed another stunner to leave everyone in the match completely decimated.

WWE Hall of Fame member Undertaker has taken centre stage at WrestleMania to farewell fans as he walks into retirement.

Edge was pinned and was a microsecond away from being counted out before a miraculous comeback win against AJ Styles.

The match was turned on its head when Damian Priest appeared ringside and distracted Styles just as he was about to go in for the kill.

That interference was all Edge needed.

When Styles attempted to execute a Phenomenal Forearm, Edge timed a spear with perfection to cut Styles in half with a mid-air tackle.

Edge and Priest shared a laugh after the fight — confirming their unusual partnership.

Sasha Banks and Naomi are the new women’s tag team champions after a rollercoaster.

They emerged victorious from a brutal match that had every wrestler involved in the contest writhing on the ground in pain.

They overcame the pairings of Rhea Ripley and Liv Morgan, Shayna Baszler and Natalya and former champions Carmella and Queen Zelina.

Banks delivered a Frogsplash on Carmella, but the champ kicked out.

Naomi eventually set Carmella up for what looked like the Gam Slam and Banks hit her at the same time with the Code Breaker.

Banks and Naomi couldn’t believe it when they were handed their belts.

The Jackass crew combined to put on a hell of a show as Knoxville pinned Zayn for a three count.

Knoxville hit Zayn with a taser after Wee Man and Chris Pontius gatecrashed the match.

Wrestling commentators were clearly blown away.

The match had some crazy action.