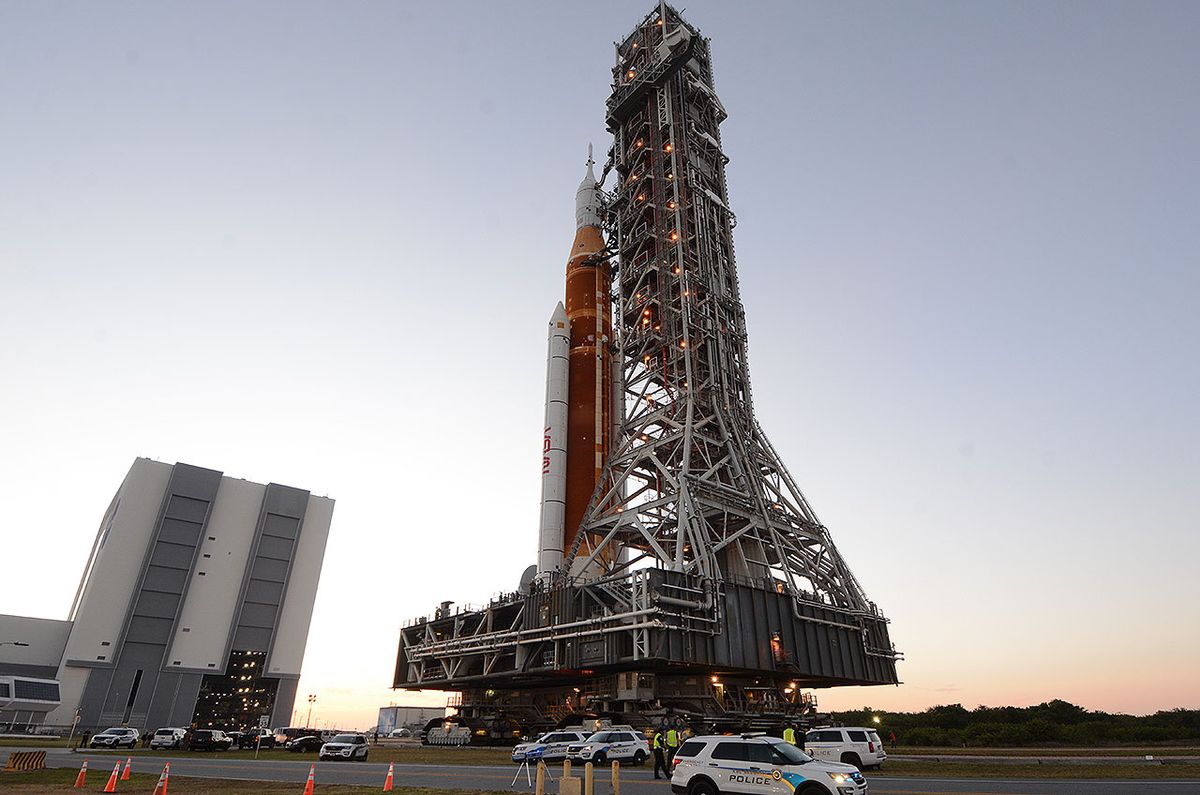 Artemis 1, the first launch for NASA’s new Space Launch System (SLS) megarocket, will send an uncrewed Orion capsule around the moon and back. NASA officials have voiced hope that Artemis 1 will lift off as soon as August, but the SLS and Orion must first complete a series of fueling and simulated launch countdown tests known as a wet dress rehearsal, which is scheduled to begin at KSC’s Pad 39B on June 19.

The rollout will start Monday at 12:01 a.m. EDT (0401 GMT) and take the Artemis 1 stack on a 4-mile (6.4 kilometers), 8-to-12-hour trek from KSC’s Vehicle Assembly Building (VAB) to Pad 39B. You can watch parts of it live here at Space.com, courtesy of NASA; the agency will apparently livestream views from the VAB when rollout begins and from Pad 39B when the SLS and Orion get there.

This will be the second rollout for Artemis 1. The first occurred in mid-March, when SLS and Orion emerged from the VAB around sunset before an audience of hundreds, backdropped by a rising full moon. It was quite the sight. The timing for this rollout is geared more toward utility than spectacle; an overnight rollout allows for more temperate and more predictable weather during Florida’s hot and humid summer months.

Artemis 1’s first wet dress rehearsal attempt began April 1 and was supposed to wrap up 48 hours later. It was delayed several times and then ultimately scrubbed after three different tries to fuel the SLS were cut short. A stuck valve and a hydrogen leak in connections between the rocket and its launch tower halted operations during the process of loading cryogenic fuel into the rocket, and Artemis 1 was returned to the VAB on April 25.

The decision to roll the rocket stack back gave NASA the opportunity to fix those issues, as well as get a head start on other scheduled upgrades. For example, in a press call on May 27, Cliff Lanham, senior vehicle operations manager for KSC’s exploration ground systems, revealed that teams have begun installing payloads for the Artemis 1 mission inside the Orion capsule.

Upgrades were also made to the vehicle’s exterior instrumentation covers to better protect against the heat and potential storms during the rocket’s two weeks awaiting testing at the pad. Infrastructure at Pad 39B also received some ahead-of-schedule maintenance in the form of increased storage capabilities for gaseous nitrogen, which the Artemis 1 team uses to purge liquid oxygen from the SLS prior to fueling operations, for safety purposes.

If all goes according to plan, the June 19 wet dress rehearsal will last about 48 hours. NASA has published a list of launch windows for Artemis 1, and agency officials have voiced cautious optimism for an August liftoff, but an official target won’t be finalized until the data from the dress rehearsal has been fully analyzed. Pending no further snags in the vehicle and ground systems, that launch opportunity lasts from Aug. 23 to Sept. 6, in case you were thinking of making any plans for Labor Day weekend.