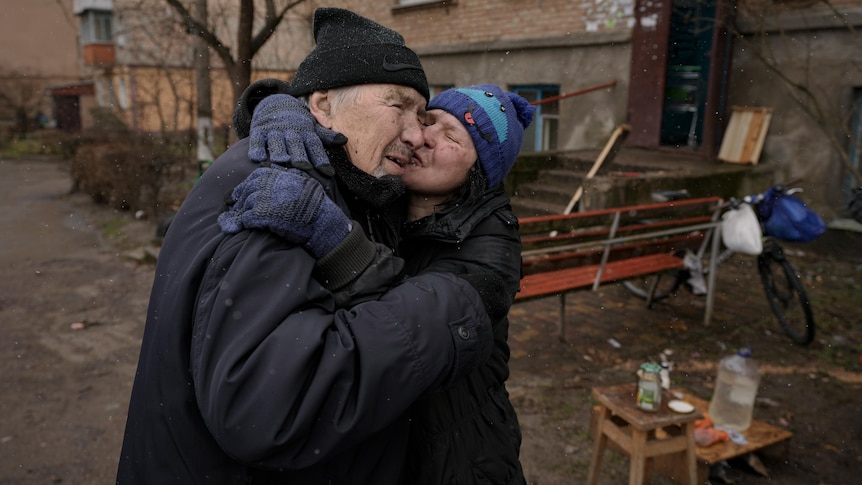 Civilians whose towns and villages were occupied by Russian troops laying siege to Kyiv have been celebrating the invaders’ withdrawal.

More than 30 towns and villages around Kyiv have been retaken by Ukrainian forces as Russian troops retreat.

Warning: This story contains an image of a dead body.

Russia says it is pulling back its forces to regroup for battles further east.

More than 4 million civilians have fled Ukraine in the 39 days since the war began.

But now some of those who could not escape have emerged from their hiding places in areas around the capital.

Those sheltering in Bucha, north of Kyiv, have had no electricity, water or gas since the beginning of the Russian invasion.

Civilians rejoiced on the streets, cooking shared meals and swapping stories of survival.

A convoy of Ukrainian forces bringing food and aid was met with tears.

The lack of a Russian military presence in the streets does not, however, signify safety for those who remain.

More than 400 bodies were found in the streets of the reclaimed villages, said Ukraine’s prosecutor-general Iryna Venediktova.

And Ukraine’s President Volodymyr Zelenskyy warned some of the corpses had been booby trapped by withdrawing Russian troops.

“They are mining all this territory. Houses are mined, equipment is mined, even the bodies of dead people,” he said.

Ukraine’s emergency services said more than 1,500 explosive devices had been found in one day during a search of the village of Dmytrivka, west of Kyiv.