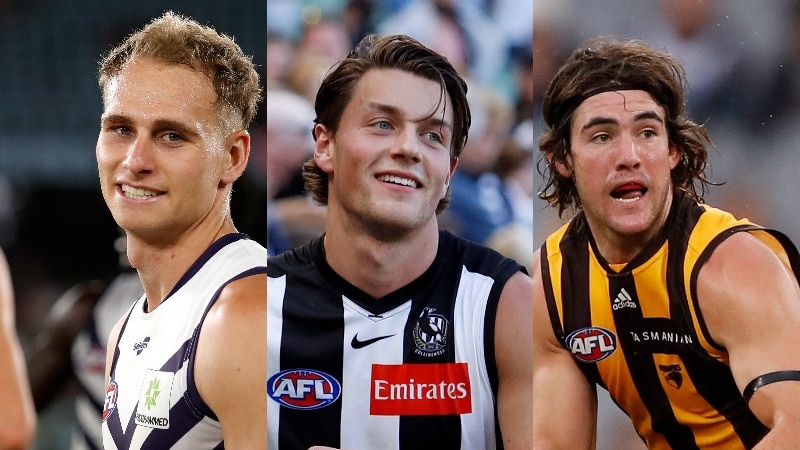 The refreshing thing about footy is that it’s not predictable.

Teams — and players — can have form slumps, and sudden surges as well.

It’s the how and the why, as well as the who, that make a difference.

For example, the fact that a fit Patrick Cripps has got back to his brilliant best this season is not a surprise.

The fact that his Carlton teammate Matt Kennedy has gone from being almost a fringe player to driving the Blues’ resurgence and signing a new three-year deal definitely is.

So who have been the ones we didn’t predict to significantly raise their game in 2022?

This is far from an exhaustive list, but read on for some of the real surprises in the first half of the season.

Brodie was taken with the ninth pick in the 2016 AFL draft — one of four top-10 selections for the Suns. Of those, just two remain: Ben Ainsworth and Jack Bowes.

Brodie was a promising midfielder, but he never could seem to hold his spot in the Suns’ line-up.

He played just 25 games in five seasons at Carrara before being traded to the Dockers in a one-sided deal that favoured Fremantle.

Coach Stuart Dew has said it was a case of Gold Coast having a strong hand of inside mids with skipper Touk Miller, Matt Rowell and Noah Anderson.

But the trade looks even more lop-sided now that Brodie has been given an opportunity at the Dockers and run with it — literally. If anyone had begun to question his quality, they certainly aren’t doing it now.

The new Freo number 17 is a contested-ball beast, averaging 13.50 contested possessions a game and 6.83 clearances a game. Both of those figures are higher than what Nat Fyfe averaged in his 15 games last year.

Brodie has struck up a brilliant partnership with midfield colleagues like David Mundy, Andrew Brayshaw, not to mention running defenders like Jordan Clark.

So much so, that when Fyfe was asked where he would fit in when he returned to the senior team this weekend after a long injury lay-off, he indicated his role at least initially would be largely in the forward line because the Freo midfield was gelling so nicely.

If Brodie can keep going like this, he will free up Fyfe to be a damaging presence up the ground, and keep the Dockers well in the mix for the top two and beyond.

A former number-one pick for St Kilda, his career was derailed by repeated concussions, and he left the Saints to regather his life and his health.

Football seemed a long way away. Now the prize full-forward is back and thriving at the Sydney Swans. The other surprise is his new role as a key defender for the Swans alongside his brother Tom.

It’s been an inconsistent season for Sydney, but key wins over Richmond and Melbourne have the Swans at 8-4, in no small part due to Paddy’s presence down back.

He is ranked eighth in the AFL for intercepts in 2022, he has shown composure in the back six for the Swans and he has the third-highest disposal efficiency on the team with a tick under 82 per cent.

He has maintained a big physical presence despite his history of concussions — and his recent scare against Hawthorn.

If he can stay on the park for the second half of the season he will be a big plus for the Swans’ defence.

Tyson Stengle came to Geelong on probably his last chance in the AFL, after a chequered start to his career.

He had shown promise at VFL level for Richmond, but never got the chance to progress, then a trade to the Crows led to 13 games in two seasons before a series of off-field misdemeanours ended his time at the club.

Now at the Cats, Stengle has flourished in 2022. In a team with two very potent key forwards, the 23-year-old has managed to carve out a damaging small-forward role that has him 14th in the Coleman medal with 23 goals.

He is also just outside the top 10 in the AFL for overall score involvements with 78, alongside the likes of Sydney’s danger pair: Luke Parker and Chad Warner.

His speed, evasiveness and ability to get to the drop of the football plus his goal sense makes him a valuable add for a Geelong team set for another serious challenge for the flag in the back half of the year.

Jai Newcombe did not make a huge impact in his first season at Hawthorn, picking up limited time on ground and playing seven games in a team toward the foot of the ladder.

Some improvement might have been expected for his first full season. What has happened since, had not.

With half of the season in the books, Newcombe is the favourite for the Rising Star, and he is a big reason why the Hawks — who were tipped by many to get the wooden spoon — are proving difficult opponents in 2022.

Newcombe’s physical and energetic performances have been both impressive and fun to watch for Hawk fans and neutrals alike.

The Hawks may be in rebuild mode under new coach Sam Mitchell, but it’s not expected that a 20-year-old is leading or top three in his team in so many categories.

In fact, he is in the top 20 in the AFL in three areas — tackles, turnovers and metres gained.

Of the 14 players ahead of him in the metres gained stat, the average number of games played is 136.9.

This weekend, Newcombe will run out for the Hawks against the Dockers to play game 19 in a career that is taking off by the week.

The rise and rise of a certain blond-haired forward may have made more headlines at Collingwood in 2022, but there is a more quiet achiever who is becoming a surprise key player in the sixth season of his career.

Patrick Lipinski spent five seasons at the Western Bulldogs with his role and games diminishing to the point where he requested a trade to the Magpies at the end of 2021.

He had shown glimpses at the Dogs, but in a team with a star-studded midfield, his prospects to be an every-game player were slim.

Lipinski had a new start at the Pies, and he has proven a gun recruit, perfectly matched to the more attacking, dynamic game style of new coach Craig McRae.

Lipinski’s numbers are all heading up, but the keys to his play are as a forcer of turnovers, averaging five a game, and driving the Magpies’ attack with 5.98 score involvements a game, second only to Jordan de Goey.

This has been an exciting year for the Blues, with a number of factors in the team’s improvement from the arrival of coach Michael Voss down.

The focus before the season started was on new midfield recruits Adam Cerra from Fremantle and George Hewett from the Swans.

But the surprise of the season has been someone who was already on the list: Matt Kennedy.

The former Giant had played 42 games for Carlton in four seasons, was playing on year-to-year contracts and was seen as on the outer.

This year, however, has been a true breakout season for the Blues’ number seven, starting with his dominant performance against Richmond in round one — 33 disposals, eight clearances and 14 contested possessions.

He is averaging 11 clearances a game, up from seven last season. He also ranks 16th in the league for score involvements, with seven a game.

The mark of Kennedy’s impact on the team this season can also be shown by the fact he has missed only two games this season — the Blues lost both, to Fremantle in round six and to Collingwood at the MCG a fortnight ago.

If he can stay fit, Carlton will definitely benefit from having Kennedy in the middle in the run home.