T. rex’s short arms may have lowered risk of bites during feeding frenzies 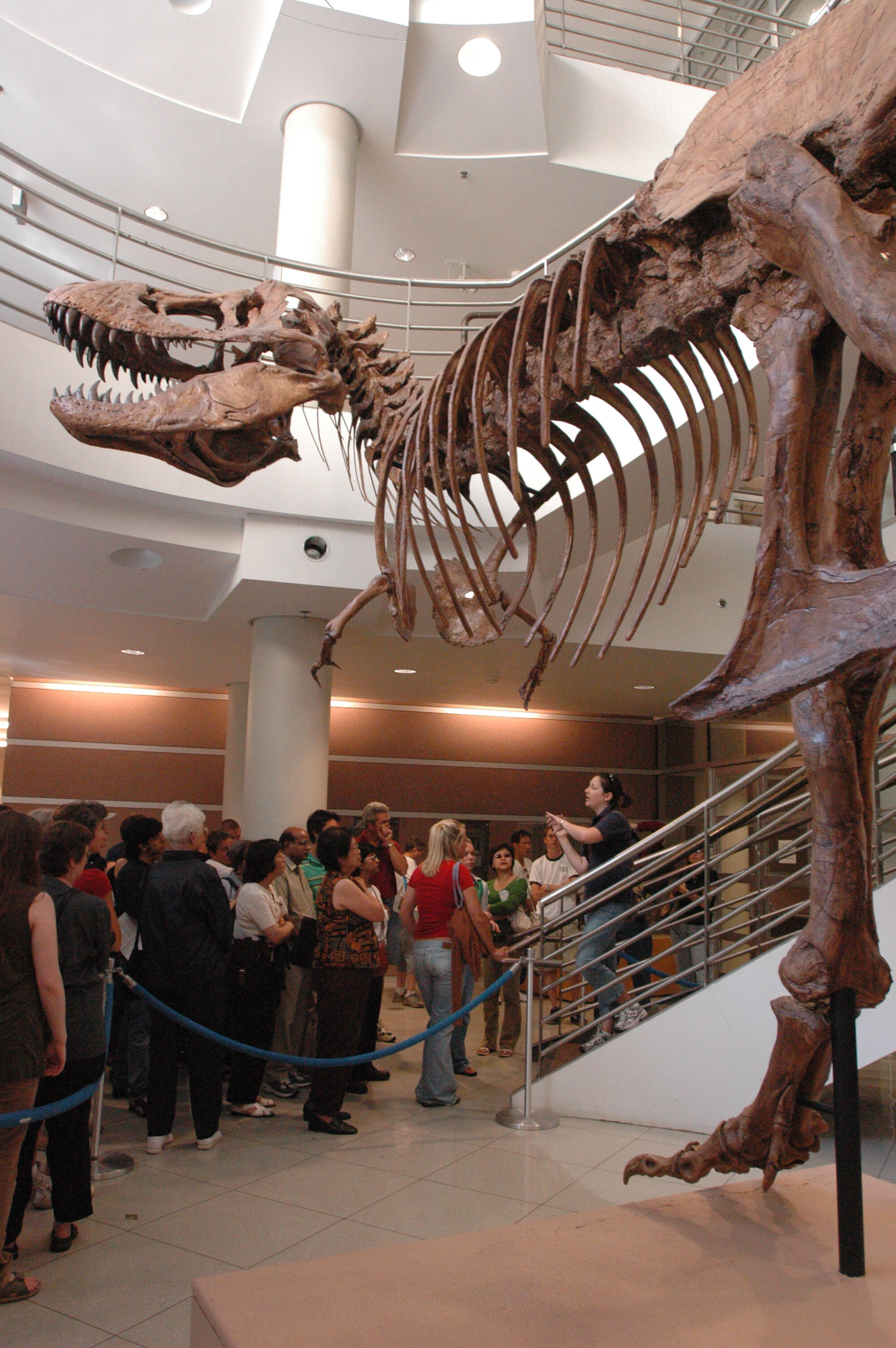 Over the two decades paleontologist Kevin Padian taught a freshman seminar called The Age of Dinosaurs, one question asked frequently by undergraduates stuck with him: Why are the arms of Tyrannosaurus rex so ridiculously short?

He would usually list a range of paleontologists’ proposed hypotheses—for mating, for holding or stabbing prey, for tipping over a Triceratops—but his students, usually staring a lifesize replica in the face, remained dubious. Padian’s usual answer was, “No one knows.” But he also suspected that scholars who had proposed a solution to the conundrum came at it from the wrong perspective.

Rather than asking what the T. rex’s short arms evolved to do, Padian said, the question should be what benefit those arms were for the whole animal.

In a paper appearing in the current issue of the journal Acta Palaeontologia Polonica, Padian floats a new hypothesis: The T. rex’s arms shrank in length to prevent accidental or intentional amputation when a pack of T. rexes descended on a carcass with their massive heads and bone-crushing teeth. A 45-foot-long T. rex, for example, might have had a 5-foot-long skull, but arms only 3 feet long—the equivalent of a 6-foot human with 5-inch arms.

“What if several adult tyrannosaurs converged on a carcass? You have a bunch of massive skulls, with incredibly powerful jaws and teeth, ripping and chomping down flesh and bone right next to you. What if your friend there thinks you’re getting a little too close? They might warn you away by severing your arm,” said Padian, distinguished emeritus professor of integrative biology at the University of California, Berkeley, and a curator at the UC Museum of Paleontology (UCMP). “So, it could be a benefit to reduce the forelimbs, since you’re not using them in predation anyway.”

Severe bite wounds can cause infection, hemorrhaging, shock and eventual death, he said.

Padian noted that the predecessors of tyrannosaurids had longer arms, so there must have been a reason that they became reduced in both size and joint mobility. This would have affected not only T. rex, which lived in North America at the end of the Cretaceous period, he said, but the African and South American abelisaurids from the mid-Cretaceous and the carcharodontosaurids, which ranged across Europe and Asia in the Early and Mid-Cretaceous periods and were even bigger than T. rex.

“All of the ideas that have been put forward about this are either untested or impossible because they can’t work,” Padian said. “And none of the hypotheses explain why the arms would get smaller—the best they could do is explain why they would maintain the small size. And in every case, all of the proposed functions would have been much more effective if the arms had not been reduced.”

He admitted that any hypothesis, including his, will be hard to substantiate 66 million years after the last T. rex became extinct.

Arms and the T. rex

When the great dinosaur hunter Barnum Brown discovered the first T. rex fossils in 1900, he thought the arms were too small to be part of the skeleton. His colleague, Henry Fairfield Osborn, who described and named T. rex, hypothesized that the short arms might have been “pectoral claspers”—limbs that hold the female in place during copulation. This is analogous to some sharks and rays’ pelvic claspers, which are modified fins. But Osborn provided no evidence, and Padian noted that the T. rex’s arms are too short to go around another T. rex and certainly too weak to exert any control over a mate.

Over more than a century, other proposed explanations for the short arms included waving for mate attraction or social signaling, serving as an anchor to allow T. rex to get up from the ground, holding down prey, stabbing enemies, and even pushing over a sleeping Triceratops at night. Think cow-tipping, Padian said. And some paleontologists propose that the arms had no function at all, so we shouldn’t be concerned with them.

Padian approached the question from a different perspective, asking what benefit shorter arms might have for the animal’s survival. The answer came to him after other paleontologists unearthed evidence that some tyrannosaurids hunted in packs, not singly, as depicted in many paintings and dioramas.

“Several important quarry sites unearthed in the past 20 years preserve adult and juvenile tyrannosaurs together,” he said. “We can’t really assume that they lived together or even died together. We only know that they were buried together. But when you find several sites with the same animals, that’s a stronger signal. And the possibility, which other researchers have already raised, is that they were hunting in groups.”

Perhaps, he thought, the arms shrank to get out of the way during pack feeding. T. rex youngsters, in particular, would have been wise to wait until the larger adults were finished.

In his new paper, Padian examines speculations by other paleontologists, none of which appear to have been fully tested. The first thing he determined, by measuring the lifesize T. rex cast that dominates the atrium outside the doors of the UCMP, is that none of the hypotheses would actually work.

“The arms are simply too short,” he said. “They can’t touch each other, they can’t reach the mouth, and their mobility is so limited that they can’t stretch very far, either forward or upward. The enormous head and neck are way out in front of them and pretty much form the kind of death machine you saw in ‘Jurassic Park.'”

Twenty years ago, two paleontologists analyzed the arms and hypothesized that T. rex could have bench pressed about 400 pounds with its arms. “But the thing is, it can’t get close enough to anything to pick it up,” Padian said.

Padian’s hypothesis has analogies in some fearsome animals today. The giant Komodo Dragon lizard (Varanus komodoensis) of Indonesia hunts in groups, and when it kills prey, the larger dragons converge on the carcass and leave the remains for the smaller ones. Maulings can occur, as they do among crocodiles during feeding. The same could be true of T. rex and other tyrannosaurids, which first appeared in the Late Jurassic and reached their peak in the Late Cretaceous before becoming extinct.

Firmly establishing the hypothesis may never be possible, Padian said, but a correlation could be found if museum specimens around the world were checked for bite marks. That would be quite a feat of fossil crowdsourcing, he admitted.

“Bite wounds on the skull and other parts of the skeleton are well known in tyrannosaurs and other carnivorous dinosaurs,” he said. “If fewer bite marks were found on the reduced limbs, it could be a sign that reduction worked.”

But Padian has no illusion that his idea will be the end of the story.

“What I first wanted to do was to establish that the prevailing functional ideas simply don’t work,” he said. “That gets us back to square one. Then, we can take an integrative approach, thinking about social organization, feeding behavior and ecological factors apart from purely mechanical considerations.”

One problem in establishing the hypothesis is that there were several groups of large carnivorous dinosaurs that independently reduced their forelimbs, although in different ways.

“The sizes and proportions of the limb bones in these groups are different, but so are other aspects of their skeletons,” Padian said. “We shouldn’t expect them to be reduced in the same way. This is also true for the reduced wings of our large, living, flightless ratite birds, like the ostrich, the emu and the rhea. They evidently took different evolutionary paths for their own reasons.”

Padian sees a common thread in the history of explanations of short arms and other characteristics of T. rex.

“To me, this study of what the arms did is interesting because of how we tell stories in science and what qualifies as an explanation,” he said. “We tell a lot of stories like this about possible functions of T. rex because it’s an interesting problem. But are we really looking at the problem the right way?”

Padian’s paper is part of a Festschift honoring mammalian paleontologist Richard Cifelli, long-time head of the Oklahoma Museum of Natural History and Presidential Professor of Biology at the University of Oklahoma in Norman.

Fleshing out the bones of Quetzalcoatlus, Earth’s largest flier ever

This document is subject to copyright. Apart from any fair dealing for the purpose of private study or research, no
part may be reproduced without the written permission. The content is provided for information purposes only.