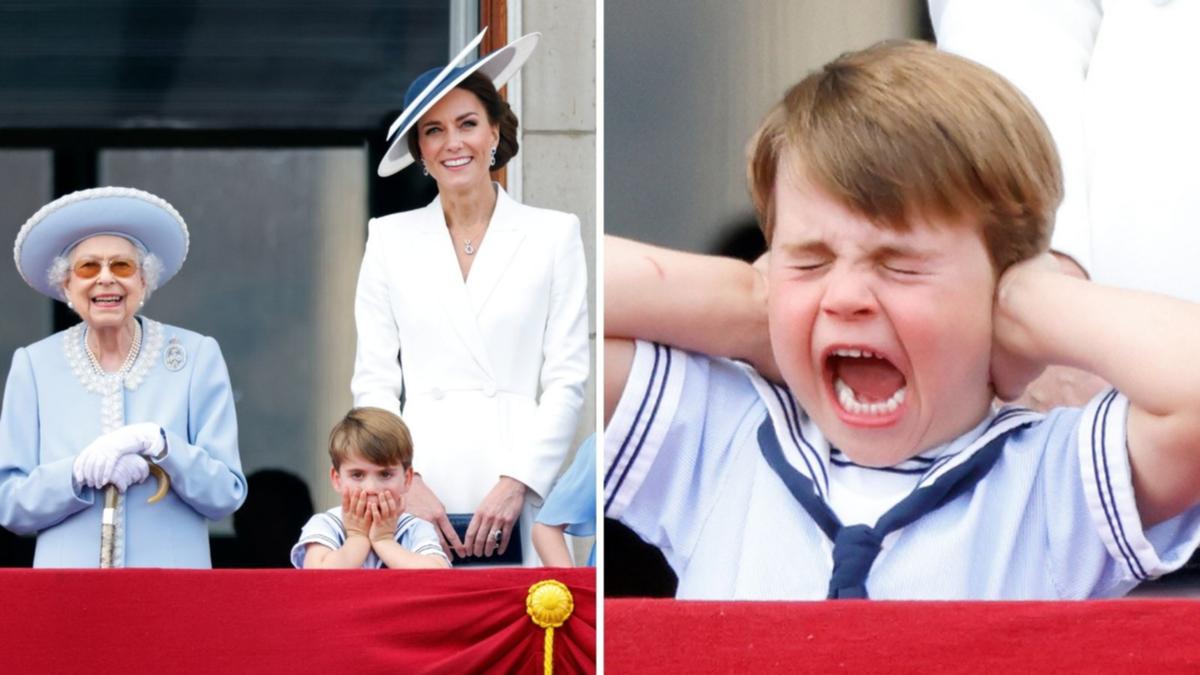 Prince Louis – the youngest son of Prince William and Kate Middleton – has pulled some serious faces as he watched the Trooping The Colour ceremony from a balcony alongside his beloved great-grandmother the Queen.

The youngster, who is described as “cheeky”, held his hands to his ears, gasped and frowned as he watched a flypast from the balcony of Buckingham Palace on Thursday, local time.

WATCH IN THE VIDEO ABOVE: Prince Louis’ adorable moment

At one point his mother, the Duchess of Cambridge, could be seen putting a comforting hand on his shoulder.

Kate wore a chic white blazer dress by Alexander McQueen, a wide-brimmed navy and white Philip Treacy hat and accessorised with some sentimental pieces of jewellery.

They included pieces from Princess Diana’s jewellery collection that were a wedding gift from Prince William.

In a touching nod, Louis wore an outfit his father had worn as a boy at the July 1986 wedding of Prince Andrew and Sarah Ferguson.

Trooping The Colour, also known as The Queen’s Birthday Parade, is a military ceremony performed by regiments of the British Army that has taken place since the mid-17th century.

It marks the official birthday of the British Sovereign.

This year, from June 2 to June 5, 2022, there is the added celebration of the Platinum Jubilee of Elizabeth II in the UK and Commonwealth to mark the 70th anniversary of her accession to the throne on February 6, 1952.

The Queen, 96, looked radiant for the occasion in a dove blue Angela Kelly ensemble with matching hat.

She smiled as she received a salute as soldiers and officers returned from the Horse Guards Parade following the conclusion of her birthday parade.

She stood on the balcony, but did use a walking stick for support.

Later in the evening, she participated in a beacon lighting ceremony from Windsor Castle.

However, in a statement, Buckingham Palace said she would pull out of a planned engagement on Friday after suffering “some discomfort”.

“The Queen greatly enjoyed today’s Birthday Parade and Flypast but did experience some discomfort,” Buckingham Palace said in a statement.

“Taking into account the journey and activity required to participate in tomorrow’s National Service of Thanksgiving at St Paul’s Cathedral, Her Majesty with great reluctance has concluded that she will not attend.”

Prince Charles, heir to the throne, represented his mother in the ceremonial role which she has traditionally undertaken.

He rode on horseback, closely followed by his sister Princess Anne and his son, Prince William.

Prince Harry and his wife Meghan Markle were back in the UK for the event, but did not appear on the balcony alongside other royal family members.

They reunited with the family as a couple for the first time since they sensationally stepped down from royal duties.

Meghan and Harry will reportedly spend some time with the Queen on Saturday.

And she is expected to meet the couple’s children Archie and Lilibet, who is named after the Queen and who celebrates her first birthday that day.

William and Kate are scheduled to be 100km away in Wales at the time of the reunion, in what some are seeing as a snub.

“The Duke and Duchess of Cambridge will visit Cardiff Castle on Saturday, 4th June to meet performers and crew involved in the special Platinum Jubilee Celebration Concert taking place in the castle grounds later that afternoon,” the palace said in a press release.

In April, Prince Harry dodged a question about his father and brother during an interview with NBC’s Hoda Kotb.

Kotb asked the prince whether he had been missing them while he was in the US.

“Look, I mean… at the moment, I’m here focused on these guys [at the Invictus Games] and these families and giving everything I can, 120 per cent to them to make sure that they have the experience of a lifetime. That’s my focus here,” Harry replied.

In May, the UK’s Mirror reported that William and Harry had been messaging via WhatsApp every few days in the lead up to the Jubilee, in an attempt to build bridges.

“The brothers needed time for everything to settle down. The family, including William, had been disappointed in the way Harry and Meghan chose to leave the royal family,” a source told the publication.

“They’ve also had FaceTime calls with their children, which has allowed them to re-bond.

“It seems that the two of them have healed the rift and are very much back on their old buddy terms.

“Meghan’s distance from Kate has also helped heal the friction between the two men.”

More on the royal family