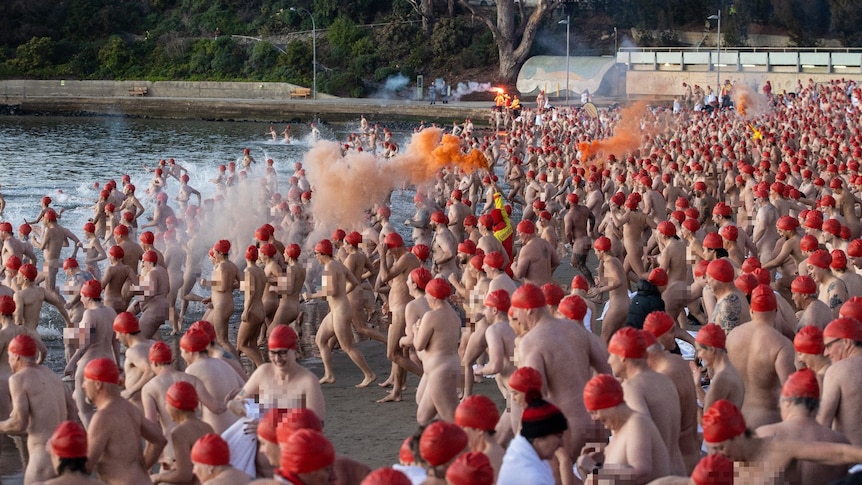 The air temperature was 5 degrees and the water about 11, but that did not stop about 2,000 swimmers from plunging naked into Hobart’s River Derwent to celebrate the passing of the longest night.

The annual Dark Mofo nude solstice swim is billed as offering “renewal and resurrection” to those willing to strip off outdoors during a Tasmanian winter.

But it may have left some with more of an ice cream headache.

One participant braced for the cold by planning the best technique for the brief dip.

Another swimmer’s philosophy was “feel the fear and do it anyway”.

Participants gathered before first light, huddling in coats and towels before dropping their kit and running into the water en masse.

Cairns resident Temperley Eva said it was the perfect way to end the festival.

However, the chilly water was a new experience.

“Cairns does not have cold water at all … you can’t have a cold shower, it’s lukewarm at best.”

New South Wales tourists Kerry Watson and Colin Sandbach joined the swim after an internet search of the best winter activities on a trip to Tasmania.

Kerry enjoyed challenging her body and stepping outside her comfort zone.

“I’m not comfortable with being naked amongst other people but it didn’t matter,” she said.

“I think I was the last one out and it was just invigorating and youthful and I don’t want to be old before my time.”

Colin loved the atmosphere and camaraderie.

“Everyone’s in a great frame of mind it’s just like a real party,” he said.

Nude swim manager Gemma Chisholm said the swim’s popularity had grown and many people had to be turned away, with tickets selling out two days after going on sale.

Mofo over for another year

The swim marks the end of the Dark Mofo festival.

The inaugural swim in 2013 almost didn’t happen after police threatened to arrest people for public indecency.

The 2020 swim was cancelled after the COVID pandemic scuttled the festival, which made a return with a shorter program in 2021.

This year’s festival began with a Reclamation Walk around Hobart, acknowledging the traditional owners of the land on which the city sits.

Tens of thousands of tickets were bought by people from all over Australia, boosting Tasmania’s mid-winter tourist numbers.

Set the ABC News website or the app to “Tasmania Top Stories” from either the homepage or the settings menu in the app to continue getting the same national news but with a sprinkle of more relevant state stories.

Here’s a taste of the latest stories from Tasmania: