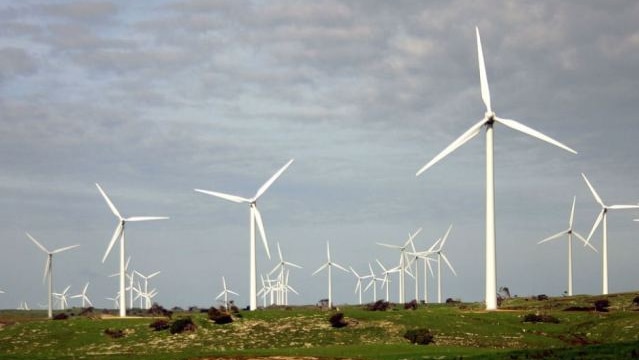 In Traprock country, 60 kilometres west of Warwick, construction on one of the Southern Hemisphere’s largest wind farms has begun.

The MacIntyre Wind Precinct is set to cost $2 billion and will produce 1,026 megawatts of energy from 180 wind turbines.

Brett Wickham, the managing director of the company behind the project, Acciona Energia, said the project will create 650 jobs, around half of which they are aiming to source from the local community.

“Acciona always has a philosophy of trying to start from the centre of the wind farm and work its way out in looking for jobs and local content and job creation, et cetera” he said.

Learning from the past

Wind farms have long been a topic of debate amongst landholders, but former National Farmers Federation (NFF) president Brent Finlay said he worked with Acciona Enegia to ensure this project would be different.

He will see many wind turbines from his house, as well as have a number of them on his property.

“They’re all a good distance from my house and all my neighbour’s houses, so that’s important,” Mr Finlay said.

“But it’s [more about] how the company conducts themselves when they’re on your property.

“We have a good level of confidence in open and transparent communication.”

The MacIntyre Wind Precinct has been compared to another energy industry with a similar land acquisition process — coal seam gas, or CSG.

Brent Finlay said in his time as NFF president he sat around plenty of kitchen tables witnessing the shock from landholders who had seen drilling rigs come up their driveway unannounced.

He said he has higher hopes for the wind farm industry.

“It’s about communication and it’s also respect. It’s exciting that we’re actually part of a renewable industry here,” he said.

Up the road at Karara, Lachlan McLeish runs cattle and sheep on his property.

The wind turbines will be within eyesight, on his neighbours’ land.

His property is on Traprock country, which is great for grazing but not considered arable for crop production.

He said this is why the region was perfect for the wind farm.

“You wouldn’t put a wind turbine down the bottom of a gully, so there’s plenty of wind here for them to do this,” he said.

Mr Findlay agreed. He said it actually provided an opportunity for farmers to diversify in country just used for grazing.

“This is some of the best wool growing country in the world, but that commodity has been through tough years,” he said.

“Diversifying and being able to diversify is really important in agriculture.”

Will your home be powered by this farm?

Construction is expected to go on for two and a half years, with the last turbine set to be installed in October 2024.

The precinct is expected to power 700,000 homes. So will your home be powered by the farm?

“It will go wherever the [electricity] transmission network allows it to go,” said Brett Wickham.

Given the power demands across Australia, Mr Wickham said the project was in a perfect position.

“It’s connecting to a strong backbone, so a transmission network that’s reasonably close to your largest demand centre, which is Brisbane,” he said.

“I would expect that most of the energy, if not all the energy from this project, would be consumed in that south-east Queensland area.”

“We’ve seen a lot of debate in the last couple of weeks about energy reliability and energy prices,” he said.

“And the impact of the war in Ukraine is obviously pushing up global energy prices.

“Queensland is not independent of those energy prices, but we can be with projects like this.”

Mr de Brenni said the Queensland government would be ready to direct the energy generated by this farm into Queensland homes as soon as it hits the grid.

“That’s where we see strong wind in places like southern Queensland that will complement what we have in terms of our solar profile.”

Get the latest rural news