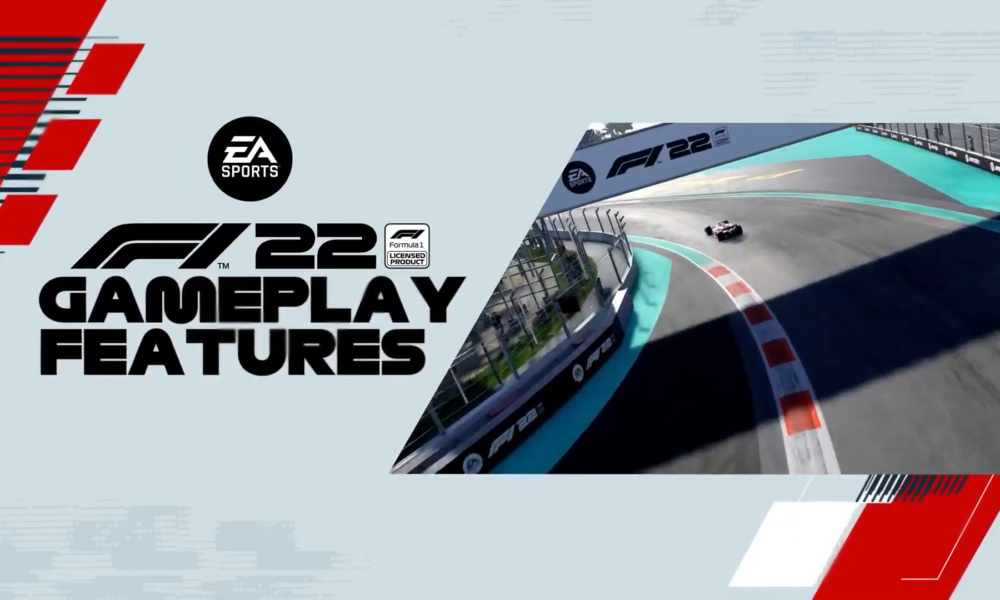 A new gameplay features trailer for the upcoming F1 22 game by EA Sports and Codemasters dropped on Tuesday (31st May) and gave Formula 1 gaming fans a glimpse at all of the things to come when the game releases in full on 1st July 2022.

Not only did the trailer list those features, but it gave some of the first glimpses of said features and updates that we’re all looking forward to. It was pretty much all of things we already knew and have reported on with some of our hands-on preview articles.

However, the short video summarizes what to look forward to in a quick two-minute clip packed with tons of blink-and-you’ll-miss-it moments.

New Handling – With the new car comes “New Handling”, which essentially means that the car will feel different than in years past in some fashion.

F1 Sprint – Sprint races, which were new to the schedule last season, will be included in race events in F1 22. You can race in them if you’d like, or you could forego them.

Immersive Broadcast: Formation Laps – A game within the game, now players can immerse themselves in getting ready to race by participating in the famed formation lap before lights out.

Immersive Broadcast: Pit Stops – Similarly to the Formation Lap, players can pit the car, to an extent, but pressing the right buttons to get into the box, affecting the pit in and pit out times.

Pit Stop Errors – If your crew isn’t trained enough, or maybe by random, who knows, but pit stop errors can and will occur and will slow your boxed lap significantly.

Immersive Broadcast: Safety Car Periods – Again, like the Formation Lap and the Pit Stop, every part of the race now has a way to participate within. Safety Car periods are included in this.

Practice Programs – New practice programs to not only better your craft of racing but to also improve skill sets are featured.

Adaptive AI – The computer opponents should hopefully be a little more realistic in this year’s edition of the game.

Accessibility – Casual, Standard or Expert settings are shown, and will affect the experience you get out of the game. They can be adjusted and fine tuned from there.

Circuit Updates: Abu Dhabi – Yas Marina was updated in 2021 in three sections of the track, which were made to increase passing opportunities in a widened hairpin in Turn 7, replacing the old Turns 11 through 14 with a long banked turn, and making Turn 17 through 20 more faster flowing.

Circuit Updates: Australia – Albert Park in Melbourne received multiple changes that were showcased in this year’s Grand Prix. Turns 1, 3, and 6 were all changed, the chicane at Turns 9 and 10 was removed, and Turns 13 and 15 were also changed. Originally four DRS zones were implemented, but one was removed for the event.

Circuit Updates: Spain – While this track will see future updates already planned, the updates for 2021 saw significant changes in Turns 10 and 11.

Player Customisation – More customisation options have been included to make your driver stand out among the rest. Not only while in the car, mind you, and also not just the driver, but your surroundings.

Supercars – Also with this F1 Life, You’ve got your own pad, it seems, to showcase certain Supercars. We get to see some examples from the Ferrari F8 Tributo, to the Mercedes-AMG GT Black Series Safety Car, to another couple of Mercedes-AMG, Ferrari and Aston Martin examples shown briefly.

A Trophy Case is shown as well!

New My Team: Enhancements – My Team is the popular career-type mode that players get into. There will be new ways to advance your team in F1 22.

Single and Two Player: Career – A regular career mode can be played alone or with a friend.

Split-Screen and Multiplayer – Play on the same console and monitor together with a friend, or of course there will be online multiplayer racing.

F2 – The feeder series for Formula 1, F2 makes its return to the next game.

While things like VR gaming and the new Miami circuit weren’t specifically mentioned in the Features video, we know they’ll be there and we did get some brief visualizations of both of those things (if you count the very erratic in-car cams at some points as possible VR).

What do you think about what we saw in the Gameplay Features trailer? Let us know your thoughts in the comments below!