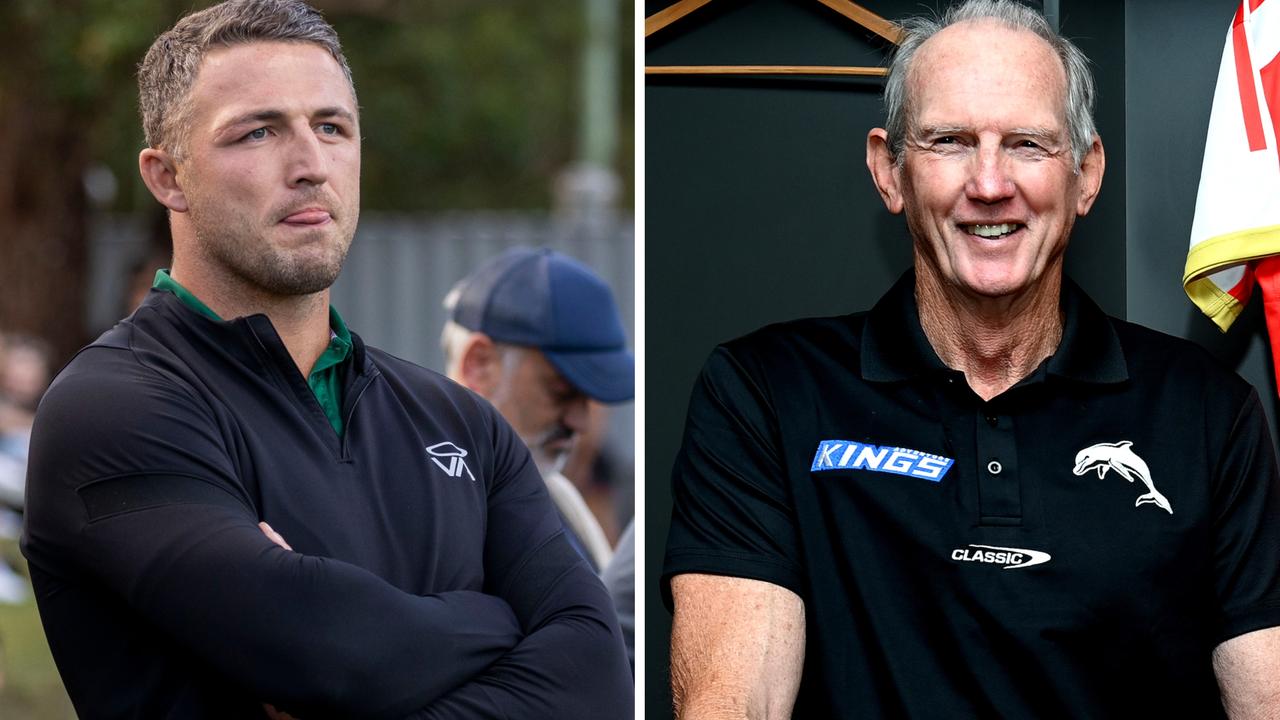 Bennett has been privately trying to convince the South Sydney Clive Churchill Medallist from 2014 to join him at the Dolphins as an assistant coach next year.

There’s no question Burgess would be a huge acquisition for the NRL’s 17th team, but where it takes a wicked turn is Burgess and Bennett both spent the weekend staying at Russell Crowe’s Nana Glenn farm – and the Gladiator is not happy about the approach.

Whether the topic got a start around the breakfast table or Crowe’s bar known as the Blind Rabbit is unknown.

When Bennett left South Sydney after steering the club into a grand final and two preliminary finals the running joke was there was a no-poaching policy on South Sydney players.

While Burgess is no longer a Rabbitohs player he remains one of the club’s most iconic figures and is still on the red and green payroll.

The Bunnies were forced to wear the $3.5 million payout remaining on his contract when the South Sydney forward was medically retired.

While Wayne wants big Sam to move to Brisbane, the Bunnies want Burgess to return to the fold in Redfern and take on a role as a junior coach.

This is where Burgess is going to have to make a big call.

Where it all lands is still up for debate but what is certain is Wayne wants to form a coaching dream team with Big Sam and Rusty is blowing up about it.

Read on for all the latest NRL news in Jimmy Brings.

The Raging Bull Gorden Tallis is never short on stories but this next one is right up there with all of Gordie’s best.

To pay his respects big Gordie made the trip home to Townsville last Friday for the memorial service for Roy.

Staying at the Townsville Casino, Tallis had a very funny encounter with cricketing royalty Brian Lara.

Gordie takes up the story.

“I was staying at the Casino The Ville in Townsville and one of the boys asked me if I wanted a lift to the memorial service for Roy,” Tallis said.

“So I said sure and then when I walked out to the car Brian Lara was also there and so we both got in the back of the car.

“The driver was from Townsville and so he was talking to me about footy and whether I’d ever been fishing with Roy and we were just having a yarn.

“Then when we arrived we had to go through quite a few different security check points.

“So we made our way through those and then we got out of the car and we went through to the service, which was a beautiful service.

“Then later on we were all having a drink at the bar.

“I got talking to a few of the Australian cricket boys and they were all having a laugh about something.

“When I asked them what it was they said “Brian Lara thought you were his security for the day”.

“So then Brian came over and said to me ‘I thought you worked for the casino’.

“Anyway we ended up having a few beers and then he also invited me to the Brian Lara Mardi Gras that he hosts every year.

“He was a great fella and we all had a good laugh about it.”

We’re tipping the larrikin in Roy Symonds would have loved that story.

TIGERS IN THE HUNT FOR SOUGHT-AFTER COACH

The planets are aligning for the Wests Tigers to make a play for Penrith Panthers assistant coach Cameron Ciraldo to take over for the 2023 season.

Back then, it was Maguire’s assistant coaches who ended up getting moved on.

This time it’s the man who’s been at the helm for three and a half years who is once-again fighting to save his position.

Wests Tigers head of football Tim Sheens will be the man who makes the recommendation to the board about the best direction for the club.

Ex-Tigers player and Cronulla Sharks coach John Morris is the other name being mentioned along with Brett Kimmorley possibly taking over in a caretaker role for the remainder of this year.

The numbers aren’t great for Madge. The Tigers coach has won 11 out of 36 games dating back to the start of last year and only 29 out of 80 during his three and a half years at Concord.

The six second half tries against South Sydney in round 12 also came at the worst possible time given the Tigers had been approaching the Rabbitohs game like a ‘grand final’.

The Panthers are hopeful of convincing Ciraldo to remain on for another 12 months at Penrith but the Tigers job with a strong local junior nursery and some quality players in Api Korisau and Isaiah Papali’I arriving next year will be hard to knock back if it becomes available.

There’s been lots of mixed messages about the surprise axing of NSW Blues flyer Josh Addo-Carr.

What is certain is Addo-Carr initially found out he’d been left out of the Blues squad via social media on Sunday.

Blues coach Brad Fittler was immediately in touch once the Bulldogs had finished their playing commitments against the Dragons at Belmore last Sunday.

True to form, Addo-Carr has pledged to fight his way back into the NSW set-up with an return to form for Canterbury-Bankstown.

The Blues speedster has told those close to him he is disappointed at missing selection but is by no means blowing up about the situation.

To Addo-Carr’s credit, he’s never let anyone down in a NSW jumper having scored 10 tries in 12 appearances for the Blues.

And the Blues have won three out of the four series he’s featured in.

The Parramatta Eels are still hopeful they can convince Blues Origin forward Ryan Matterson to remain in blue and gold next year.

Matterson has spoken at length about his meeting with Wayne Bennett and how the Dolphins are pursuing him for next season.

But the Eels haven’t given up hope and nor should they given the number of quality players already on the way out the door in 2023.

With Reed Mahoney, Marata Niukore and Isaiah Papali’i all moving on at the end of this year the Eels can ill-afford to watch another quality backrower depart.

Don’t be surprised if the blue and gold outfit try to sharpen their pencil by increasing the offer to keep Matterson at Parramatta.

Premiers Penrith have had a win on the retention front with young gun winger Taylan May committing to the club until the end of 2024.

St Marys junior Tago is also believed to be close to agreeing to a new deal at the foot of the mountains.

The next challenge for the Panthers will be trying to retain the NSW State of Origin pair of Brian To’o and Stephen Crichton.