In Morbius, Marvel’s vampire antihero is brought to life by Jared Leto in a strangely bloodless — and humourless — movie 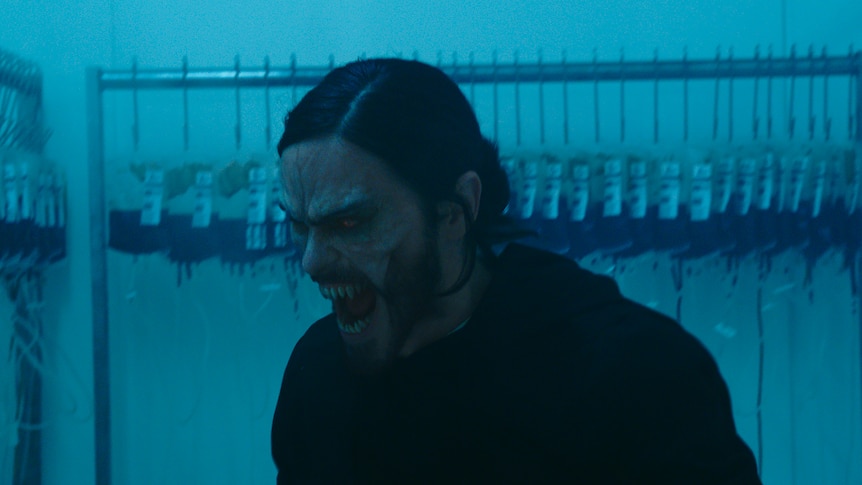 Leto – whose Joker was sidelined, to his dismay, in the film’s final cut – had the misfortune of being next to take up the role after Heath Ledger, and would quickly be out-clowned by Joaquin Phoenix. Both of those actors bagged Oscars for their performances, while Leto, with his garish Manic Panic dye job and face tattoos, was all dressed up with no awards ceremony to go to, nor any contracts for spin-offs to sign.

In search of a comic book movie franchise to call his very own and seemingly determined to bust out of the character actor mould, Leto pivoted from DC to Marvel — with the vampiric Morbius.

Directed by Daniel Espinosa (Life), this standalone entry in the rapidly metastasising Marvel canon sits in the same cinematic mini-universe as the Venom films, albeit with the lashings of humour largely subbed out for horror.

It’s the second man-bat blockbuster (after The Batman) to have come screeching into the light in March after a pandemic-induced benching, both of them underwhelming.

Leto plays the titular biochemist: afflicted with a rare and degenerative blood disease, Dr Michael Morbius races to find a cure through highly experimental means, attempting to “remix” his DNA with that of the vampire bat.

With this treatment comes superhuman abilities and a few nasty side effects – namely, heady bouts of bloodlust, the denial of which sees him morph into a sort of gangrenous gargoyle, literally climbing up the walls in want of a fix. (Hey, he’s lucky he didn’t invent COVID-19.)

It’s a similar – one could argue too similar – Jekyll and Hyde set-up to that of Venom, wherein Tom Hardy’s schlubby journalist had to contend with his body’s colonisation by an ‘alien symbiote’ with a vicious set of gnashers and a yen for human brains.

And, as per Venom (and its sequel, Venom: Let There Be Carnage), the conflicted protagonist must here face off against another of his particular mutant kind; Matt Smith (The Crown; Doctor Who) plays Morbius’s surrogate brother and benefactor Milo – an invention of screenwriters Matt Sazama and Burk Sharpless – who shares a diagnosis with the good doctor and proves all too eager to partake of his malfunctioning ‘cure’.

Leto has established himself as an actor who relishes gruelling physical transformations for the screen (before he won an Oscar for his turn as a trans woman emaciated by HIV in Dallas Buyers Club, there was the time he gained 67 pounds to play the man who shot John Lennon and received only gout for his trouble) but he is gracious enough to let CGI do most of the heavy lifting here.

Given the character description thus far, it may come as a surprise that what Leto found challenging about playing Morbius was his apparent resemblance to the character: “I’m not used to playing roles that are a little bit closer to who I am, day in and day out,” he told Variety.

I’m sure he meant Dr Morbius specifically, and not his ghoulish alter ego. And I’m mostly sure that he wasn’t trying to suggest that he thinks himself the intellectual equal of a Nobel Prize-certified scientist. Let’s assume rather that he was referring to the warmth he tries, unconvincingly, to bring to the character.

Plopped-in references to Flamin’ Hot Cheetos and Cosmo magazine are no doubt intended to make Morbius ‘relatable’ – he’s just a chill, cool guy who happens to be a scientific genius, like you and me and Jared Leto – but feel like they were written by someone who doesn’t realise that their employees laugh at their jokes mainly because they want to keep their jobs.

“Milo, what are you wearing? A quilt?” Morbius quips cheerily by way of greeting his friend, before there’s any bad blood to speak of between them. What Milo is wearing is a knitted cardigan.

Where Tom Hardy in Venom was happy to play the fool, Leto wants to play someone who has a sense of humour – which is different, and in this case not funny. (Not that Leto can’t get delightfully foolish – see, for instance, House of Gucci.)

Morbius doesn’t want to be a comedy, so this is really a minor complaint – even if it has a lot to do with why the film at times plays more like a vanity project for the actor-slash-musician-slash-philanthropist than it does an introduction to a new member of the MCU.

A bigger issue is the sheer predictability of the proceedings, which stems in part from the stability of the moral code according to which Marvel movies tend to operate, with ‘good’ and ‘evil’ kept separate by a nice high wall.

Like Venom, Morbius has been marketed as an antihero – but I don’t think he is one. Sure, his vampiric urges differentiate him from the guys in capes, but you can tell from the way that he gratefully sucks down those sachets of artificial blood (his own invention, mind you) that his moral allegiance is never going to truly be called into question.

The one point at which it seems he’s given into temptation proves to be a cinematic feint; not even in a mindless frenzy would Dr Morbius prey upon an innocent victim.

Because he’s not actually his own enemy (or a potential enemy of the state), Sazama and Sharpless have conjured Milo, Morbius’s dark double, who sees sucking the blood of others as a means of extracting reparations for a life of pain and sickness.

Naturally, Milo entreats his oldest friend to run amok with him – and naturally, he fails.

To establish a vampire vs vampire rivalry (instead of throwing two different mutant species into the ring) and never dangle the idea that one could be led down the moral path of the other; to deploy this kind of doubling only to reinforce the idea of one character as inherently ‘good’ and the other ‘bad’, is to miss precisely what could be interesting about such a set-up.

Morbius doesn’t want to wrestle with that kind of ambiguity, nor risk being goofy, and the results are correspondingly bloodless.

Morbius is in cinemas now.