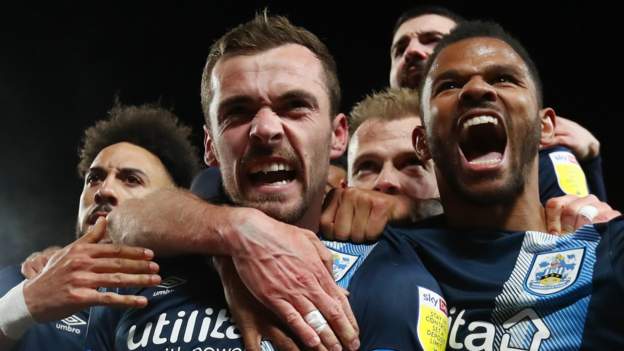 The Terriers’ play-off chances had been dented in recent weeks, having not won in three games, but the late goal solidified their top-six hopes.

Having played with an extra man for the entire second half after Tom Eaves’ second yellow card just before the break, the frustration was palpable until 11 minutes from the end.

Danel Sinani’s free-kick was headed towards goal by Tom Lees, parried away by home goalkeeper Matt Ingram, but bundled home by Toffolo.

They fashioned a glorious chance to steal a point deep into added time as Richie Smallwood crossed for substitute Allahyar Sayyadmanesh, but the Iranian headed wide from six yards out.

It was a sixth-straight home defeat for Hull, a club record, but they have a 13-point buffer to the bottom three.

The Tigers’ chances of beating their high-flying Yorkshire rivals was made even more difficult by Eaves’ dismissal in first-half stoppage time.

Having already been booked for an unnecessarily strong challenge on Levi Colwill on the halfway line, he needlessly tripped Lewis O’Brien and was shown a second yellow card.

Hull almost paid the price immediately as Ollie Turton headed a free-kick wide from the middle of the area, but the hosts held out bravely deep into the second half.

There was a suggestion Lees was offside in the build-up to the goal but Hull’s protests were waved away as the Terriers celebrated wildly in front of their travelling support.

The visitors had earlier been denied two penalties by referee Jeremy Simpson – the first a clear handball from Jacob Greaves and then Smallwood’s foul on Josh Koroma that was ruled to be outside the area.

Huddersfield’s second-half dominance eventually paid off and they now have a 10-day wait before entertaining fellow play-off chasers Luton.

“I think it wasn’t a purposeful tackle for the second yellow card but I am not complaining.

“We reacted well until the goal and then we created shots and corners and chances for the equaliser.

“Allahyar travelled a very long way before today and it would have been great for him to score at the end.”

“We would have liked to have got the result sooner than we did but know that doesn’t happen in the Championship which is such a very competitive competition.

“When they lost a player we tried to put more balls into the box but we had to wait until late in the game to seal the three points.

“We prevented them counter-attacking and stopped them winning many fouls which blocked their way back into the game.”