How Prince Andrew is plotting public comeback after escorting Queen 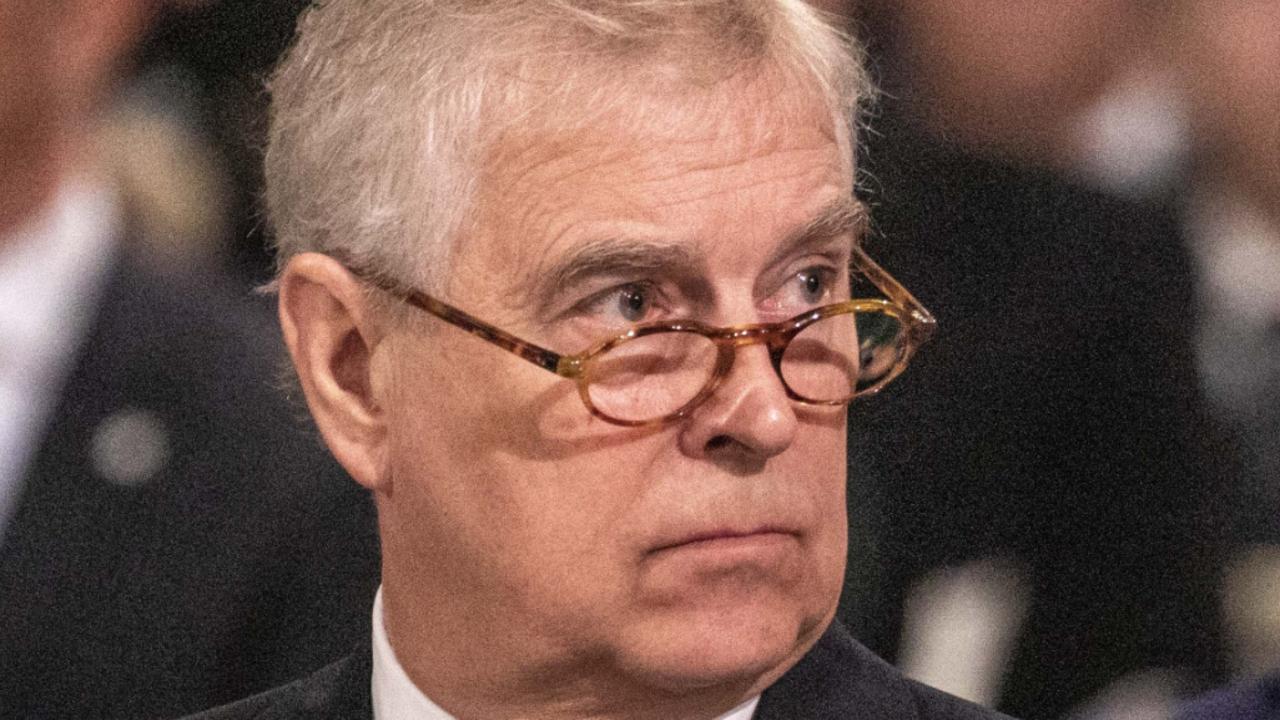 His name is synonymous with “disgraced” but there are some worrying signs that Prince Andrew is hatching a new plan.

And our Queen? Well, she has her son Prince Andrew.

Sigh. What is it about women with crowns and the men who inveigle their way into said rulers’ good graces?

A month ago, if you had asked me whether we, the public, had seen the last of the Duke of York on the royal frontline, I would have fallen off my chair.

Andrew’s name is now permanently preceded by ‘disgraced’ and in March he agreed to pay Virginia Giuffre a reported $21.5 million, to settle her civil sex abuse claim. (He has, of course, always strenuously denied Ms Giuffre’s claims.)

The 62-year-old’s goose looked not so much cooked as charred. All he had ahead of him, it seemed, were interminable weeks stretching into months and years of being stuck at his palatial grace-and-favour (read: basically free) home with ex-wife Sarah Ferguson and nothing to do all day but contemplate his demise and practise his golf swing.

But that Andrew. He’s a wily one.

Instead, this week he proved you can’t keep a shameless duke down with him managing to secure for himself a starring role in the thanksgiving service for his father Prince Philip at Westminster Abbey.

In the wake of his spectacular reversal of fortune, even momentarily, this weekend, what only weeks ago seemed like a ludicrous notion has now risen phantom-like on the horizon: Is Andrew very seriously working on a comeback?

His attendance at Tuesday’s Abbey service had never been in question. As a family event rather than an official occasion, despite being defrocked, denounced and permanently demoted, as one of Philip’s sons, he was always going to be in the congregation.

So too had the possibility of him driving from Windsor to London with his mother been mooted, after all they only live a few kilometres apart. (Let’s all just pretend this was about them saving on petrol as prices skyrocket. Those Windsors! So economical!)

But things took a turn for the extraordinary with Andrew, rather than making his way to his seat with his daughters Princess Beatrice and Eugenie and their inoffensive husbands as the order of service had specified, veered off course. Oh no.

Instead the 1800 people in the Abbey and the TV audience watching live across the UK watched a man whose name has become synonymous with sleaze of the most horrifying sort escorting Her Majesty to her seat.

(The plan had been for the Dean of Westminster to help the monarch, who is suffering from increasingly mobility problems, to her seat.)

For once, the reaction of the wider royal family seems to have aligned perfectly with public feeling on the matter in that they too were reportedly horrified by the turn of events.

According to the Daily Mail, “The shamed royal [had] insisted on accompanying the Queen from Windsor Castle to the thanksgiving event at Westminster Abbey” a fact “that senior royals had ‘reluctantly’ accepted.”

However, a “family source” has told the Mail that senior royals, including Princes Charles and William, had been left “dismayed” by Andrew’s elevation and that the situation had caused “consternation.” (Well, that’ll show Andrew! Consternation is only one step away from mild disquiet and that is a hop skip and a jump to displeasure!)

For all the anonymous sources and royal insiders who have popped up in reporting since the Service to covertly express just how furrowed various royal brows are behind-the-scenes, Andrew looks like he has pulled off this coup. Since then he has not been reprimanded in any fashion, as far as we are aware, or punished for what looks like him pulling a swifty.

In short – he got away with it.

So what’s to stop him not only trying this trick again, and on a bigger stage?

In two months, the world’s eyes will be on London for the Queen’s Platinum Jubilee celebrations which will culminate in a four-day public holiday in early June. On the cards are the first Trooping the Colour since 2019, a live concert from Buckingham Palace and the entire clan attending the Derby at Epsom Downs, all of which will present the grasping duke with ample opportunities to try and wedge himself into the forefront of proceedings.

See parts of the Jubilee, like the thanksgiving service, are also “family” events (hence why the similarly excommunicated Harry and Meghan, Duke and Duchess of Sussex might also be on the guest list) thus raising the possibility Andrew could try and pull another stunt like the one we saw this week.

According to the Telegraph, some royal aides “believe the Duke has been positioning himself as Prince Philip’s replacement as the Queen’s closest confidante and unofficial adviser” and that there is “growing concern that an emboldened, and some say ‘tone-deaf’” Andrew will attempt to co opt the Jubilee “as a further opportunity to rehabilitate his ruined reputation.”

Well, he’s managed to convince his 95-year-old mum to let him play a starring role once now, as truly breathtaking as that was, so there is every chance he could attempt the same fancy footwork to try and get back into the spotlight again.

The biggest thing standing in his way though are his brother and nephew, Charles and William.

The two future kings were “among those who are understood to have voiced concerns” about the idea of Andrew helping his mother inside the Abbey, according to the Express, when the notion was first raised.

“[The question of Andrew being involved] went away for a while but then came back at the last minute, according to sources, leaving the family horrified to see the Queen accompanied into the Abbey by her disgraced second son,” the Express has reported. (Can’t get away from that ‘d’ word can Andrew?)

So too did both Charles and William play central roles in the decision for him to step back from public duties in November 2019 and again in January this year when he was stripped of his remaining military titles and patronages. As the Times reported earlier this year,” It wasn’t just the Queen: the whole royal family knifed Prince Andrew” and that “all his siblings were involved” in the decision to move against the duke.

However, it all comes down to one person, and one person only, and her decision and she is clearly, based on this week’s events, still his numero uno supporter.

Peter Hunt, the BBC’s former royal correspondent for the broadcaster, has argued that his shocking inclusion in proceedings equates to Her Majesty “endorsing” her son.

“It didn’t happen by chance. He could have sat in the congregation with others, with his relatives, but they actively decided that he would have this role of supporting her,” Hunt told the Mail. “She’s very clearly stating that he has a role at family occasions.”

Therefore, if Andrew pressed his case particularly sweetly or cunningly, it is not that outlandish an idea today that we could see Andrew back on the Buckingham Palace balcony in the not-too-distant future, his Cheshire cat grin on repugnant display as he waves to the crowds.

I know, it’s wild. But more than that, it’s also a particularly perilous move for Her Majesty.

One insider has told the Telegraph that “there is no doubt there are genuine fears behind palace gates that the Queen risks not only being tainted by association with Andrew, but also overshadowed by the strength of public feeling against him.”

And feel the public does, very very strongly, about a man who is the UK’s number one entrant in the MeToo International Hall of Infamy. The most recent polling shows that as of mid-March six per cent of Brits view him favourably. (88 per cent view him negatively and seven per cent don’t know begging the question, how bad is the Wi-Fi in parts of Great Britain?)

While the Queen has proven to have a steely pragmatic streak when it comes to her family members slash royal employees (exhibit A: Harry and Meghan) clearly that same hard-headedness does not extend to Andrew these days.

Given this state of affairs, aides should be worried – very worried.

It was Andrew’s role in the service which dominated UK coverage, with any mention of Philip’s legacy and life’s work totally lost in the clucking fray. (He might have been horrendously gaffe-prone and very likely racist but the man started trying to agitate about conservation and environmentalism back in the 60s. Credit where credit is due.)

This situation would only be amplified if the same thing happened during the Jubilee. Buckingham Palace can immediately wave goodbye to all the cheery, nationalistic headlines lauding the Queen’s seven decades of service and instead look forward to the coverage being entirely monopolised by Andrew. The outpouring of glowing press and public affection that the Jubilee should trigger would be vaporised and replaced with not only teeth-grinding public anger but an incensed Fleet Street agog that Her Majesty would risk her legacy for her pathetic excuse of a son.

What the royal family so desperately needs, after the Sussexes’ claims of racism and cruelty, after the disgrace of Andrew, and after the Duke and Duchess of Cambridge’s recent Caribbean tour which stirred up the ghosts of Britain’s brutal colonial past and bought the issue of republicanism in the Commonwealth to the fore, is a win. A sure-fire, straight-up, controversy-free PR win. I’m thinking of something involving small children, big smiles and a Red Arrow fly-past.

Because how many more self-inflicted disasters can one royal house survive before the public is fed up once and for all?

Things very obviously did not end well for Marie-Antoinette or the Tsarina. (The Queen happens to be distantly related to the latter, who was born Princess Alexandra of Hesse and was Queen Victoria’s granddaughter.) While the rabble-rousing proletariat may no longer be quite so bloodthirsty or such dabhands with a guillotine, an angry, incensed populace is as dangerous to a monarch today as it was two hundred years ago.

Here’s hoping Her Majesty works this out before the house of Windsor finds itself confined to the history books.

Daniela Elser is a royal expert and a writer with more than 15 years experience working with a number of Australia’s leading media titles.