Have Scientists Really Found Wormholes Through Space-Time? The Truth Behind The Headlines About Ghostly ‘Odd Radio Circles’ 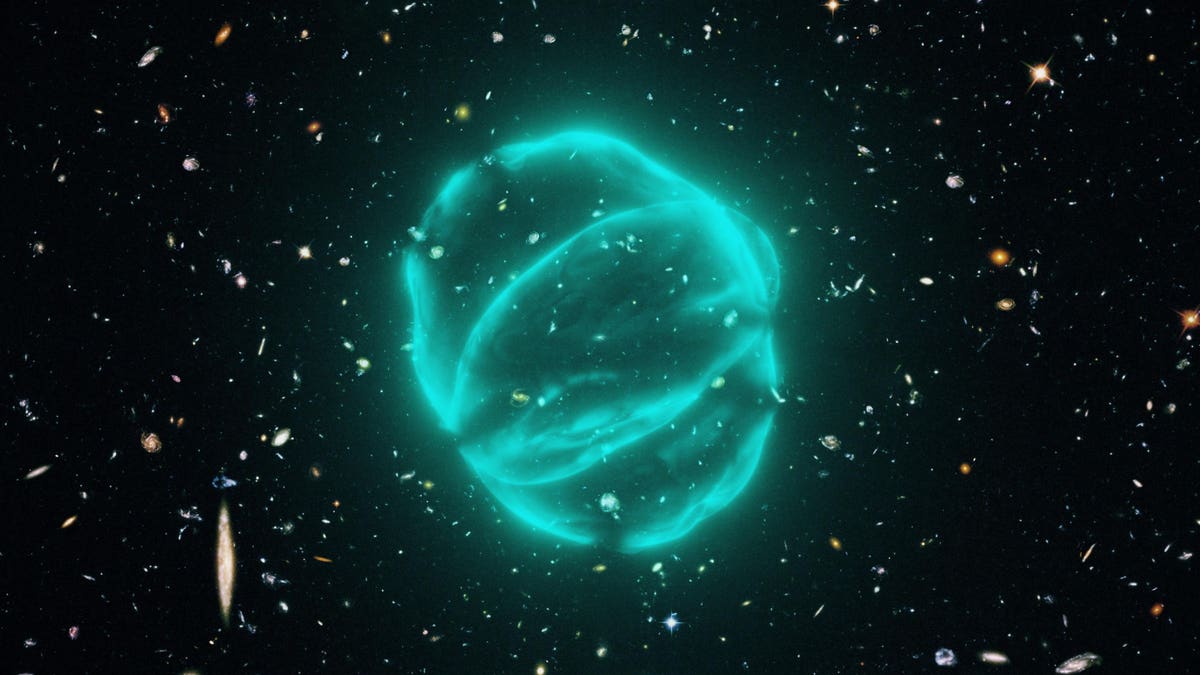 Their name says it all. “Odd radio circles” (ORCs) have been astronomy’s most mysterious objects for a few years and, if you hadn’t guessed it yet, scientists continue to be baffled about what exactly these giant radio rings in space really are.

That’s despite an international team of astronomers using the MeerKAT radio telescope in South Africa—one of the world’s most capable radio telescopes—to get the clearest image so far of the first ORC ever found, nicknamed “ORC1.” The images were published last week in the Monthly Notices of the Royal Astronomical Society.

Here’s everything you need to know about ORCs—what they are, where they come from and how they can (and cannot) be explained:

What are ‘odd radio circles?’

They are incredibly large, but faint diffuse rings of radio emission around distant galaxies for which astronomers have no explanation. They’re blue-green in color, brighter at their edges and look a bit like smoke-rings.

ORCs have only been detected using radio telescopes. When astronomers have trained optical, infrared and X-ray telescopes on them they seen nothing.

However, three of the ORCs found so far are around galaxies, suggesting a link. ORCS are also called “ring galaxies.”

“We know ORCs are rings of faint radio emissions surrounding a galaxy with a highly active black hole at its centre, but we don’t yet know what causes them, or why they are so rare,” said Professor Ray Norris from Western Sydney University and CSIRO and one of the authors on the paper. He has previously estimated that there are 1,000 ORCs in the night sky just waiting to be found.

The new images of the first-ever ORCs reveal a complex internal structure of multiple arcs.

What is radio astronomy?

Radio astronomy is the study of the night sky in radio frequencies. Radio telescopes detect and amplify radio waves from space—electromagnetic radiation emitted by stars, galaxies and other cosmic objects.

How big are ‘odd radio circles’ and how many have been found?

About a million light years across. That’s 16 times bigger than our own galaxy, the Milky Way. The rings are so big that they’ve expanded past other galaxies.

Astronomers think that ORCS probably take about a billion years to reach the size we see them today.

Only five odd radio circles have ever been revealed in space. The first one was discovered in 2019 using the Australian Square Kilometre Array Pathfinder radio telescope array.

Are ORCs actually wormholes through time?

The idea that ORCs could be the “throats of wormholes” has been one of the ideas put forward by two Russian scientists. A wormhole is a theoretical passage through space-time that links two places physically very far from each other.

“People often want to explain their observations and show that it aligns with our best knowledge,” said Dr Jordan Collier of the Inter-University Institute for Data Intensive Astronomy, who compiled the image from MeerKAT data. “To me, it’s much more exciting to discover something new, that defies our current understanding.”

What else could ORCs be caused by?

Could ORCs be caused by galactic spherical shock waves? Or the result of giant black holes? Could be. ORCs could signal momentous events in galactic evolution. Or not. The scientists who just imaged the first ORC have a few theories about their origin:

When will the mystery of ORCs be solved?

That’s unclear, but more sensitive radio telescopes will be required to really understand ORCs. Cue the Square Kilometer Array (SKAO), a $2.2 billion radio telescope like nothing ever constructed before that will comprise two large and complex radio telescope networks—197 radio dishes in Karoo in South Africa’s Northern Cape and 131,072 antennas in Murchison, deep in the outback of Western Australia.

“No doubt the SKA telescopes, once built, will find many more ORCs and be able to tell us more about the lifecycle of galaxies,” said Professor Norris.