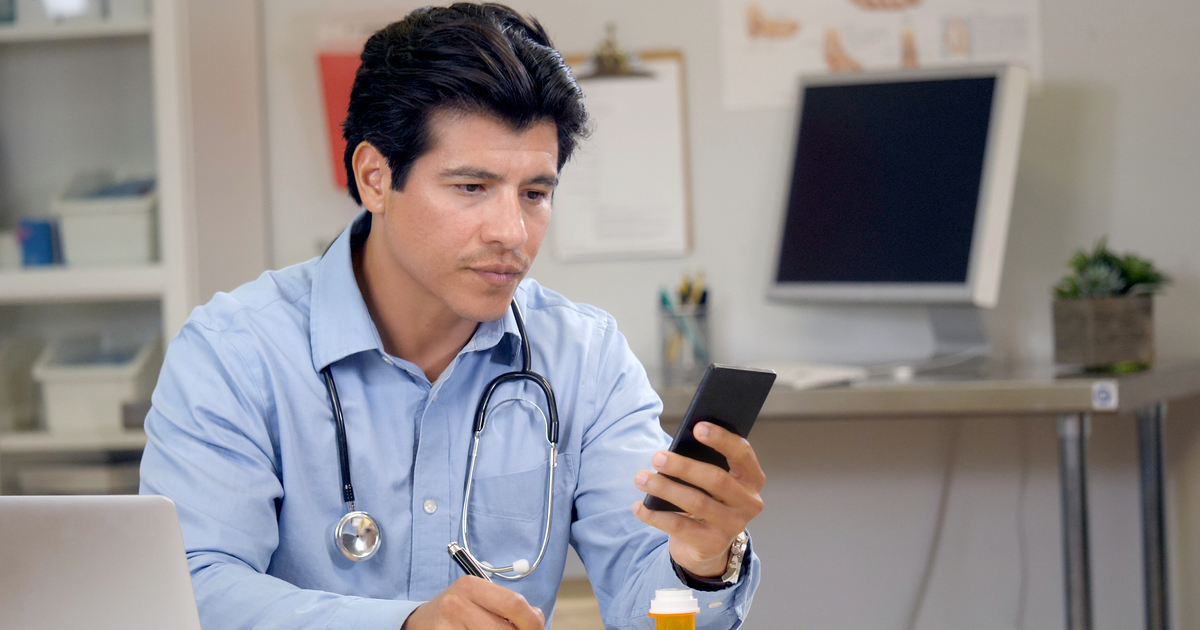 Using swabs and DNA extraction, new research claims to have uncovered the fullest picture yet of the microbes found on mobile phones, with big implications for healthcare workers.

Most of us already know our mobile phones are likely to provide a welcoming home for microbes.

A new Australian study, however, claims to give the most comprehensive picture yet of the scale of contamination.

Its authors, who include Professor Mark Morgan, Chair of RACGP Expert Committee–Quality Care (REC–QC), believe the findings could have serious implications for healthcare workers’ infection control, including in general practice, and the wider community.

The research, published in the journal Scientific Reports, was carried out by swabbing the phones of 26 healthcare workers from the paediatric intensive care unit (ICU) and the paediatric department of the Gold Coast University Hospital in Queensland.

The lead author is Lotti Tajouri, an Associate Professor of Genomics and Molecular Biology at Bond University.

He told newsGP the methodology, which included DNA extraction and next generation sequencing, has given more detail of what the ubiquitous devices are harbouring than ever before.

‘What people did in the past was the top tip of an iceberg,’ Associate Professor Tajouri said. ‘And now [with] what we’ve just been publishing, we are looking at almost a full iceberg.

‘By swabbing and having a direct sequencing, we could actually see all the genomes of all the bugs, regardless [of whether] they could be cultured or not.’

‘On duty medical staff with their [non-sanitised] mobile phones might be the cause of nosocomial diseases contracted by vulnerable immuno-compromised patients during various procedures,’ the authors write.

Associate Professor Tajouri says the extent of mobile phone use in everyday life, as well as the way in which they are used, has led him to conclude much more attention should be paid to the infection risks they pose.

‘I consider mobile phones [to be] our third hand,’ he said. ‘And the problem with mobile phones is not only that we carry them everywhere, they are actually a magnet for microbes.’

He says the devices being stored close to the body in a warm place, their use in conversations, and their presence during mealtimes are among factors that mean ‘the mobile phone becomes like a five-star hotel for microbes’.

He said he was inspired to take up the research while observing hospital staff using their mobile phones during the birth of his child.

More than half also said they had never cleaned their phones, which Associate Professor Tajouri says contrasts to their awareness that their device could harbour microbes (96% said they believed it would).

While he expected to see a large presence of microbes after his earlier observations in the maternity ward, the results still startled him.

‘Where I’m surprised is the quantity of so many pathogenic microbes,’ Associate Professor Tajouri said.

‘And where I’m very, very surprised is the amount of genes that are found to be virulent factor genes as well as antibiotic resistant genes.’

For Associate Professor Tajouri, the most pressing issue is the potential for contaminated mobile phones to counteract existing hygiene controls.

‘The biggest problem that I have … is that mobile phones negate hand washing,’ he said.

‘You can do the right thing by washing your hands as many times as you want. The bottom line is, you cross contaminate your hands all over again when you touch your mobile phone.’

Professor Morgan said while the study was conducted in a hospital setting, the findings are highly relevant to general practice.

‘I think it’s really important for GPS and their staff to be aware that mobile phones are an ideal breeding ground or platform for microbes to live on,’ he told newsGP.

‘They’re kept warm, often in a pocket, they’re breathed on, there is a biofilm from fingerprints over the surface of them.

‘This study has shown that they are literally covered in all manner of microbes, including superbugs and viruses and fungi and bacteria.’

He also said the study has implications for infection control.

‘If you then touch a mobile phone, you have to assume your hands are contaminated again,’ Professor Morgan said.

‘And so there’s a need to use hand hygiene before and after touching a mobile phone and to clean the mobile phone as often as convenient or possible.’

There is also a need, Professor Morgan believes, to assess ways of decontaminating phones. The study itself suggests ultraviolet sanitisers as one possible solution.

‘I’m hoping [the study] will trigger some investigation of the most effective methods of sterilising phones,’ he said.

‘If they are effective, I’d love to see that everywhere where there’s alcohol hand dispenser, there’s also an ultraviolet steriliser.

‘We’d have to do some investigation about their effectiveness in the real world before getting to that level of expense.’

The impact of increasing the focus on mobile phone hygiene in this way is currently unclear, Professor Morgan says – but likely to be significant.

‘We know that the research on hand hygiene is very fundamental for preventing infection of the healthcare worker [and] …the patient,’ he said.

‘We know that hand hygiene is a really vital and easy component, and makes a huge difference.

‘And we have to assume that mobile phone hygiene is the same but just has not been tested in the real world to see what a difference it is making.’

The authors also flag concerns about the role of mobile phones in the context of a global pandemic, and for biosecurity.

‘Hundreds of trillions of micro-organisms on the surface of billions of mobile phone fomites cross borders, by means of modern transport, unnoticed as Trojan horses,’ the study reads.

Associate Professor Tajouri said he believes poor awareness of mobile phone hygiene is likely to have contributed to the spread of COVID-19.

‘We’ve been warning back in 2020 that the spread of the SARS-CoV-2 could be most likely associated with mobile phones because of modern transport,’ he said.

‘The bugs on platforms like mobile phones stay alive. You can cross borders without any problems.’

Professor Morgan, meanwhile, says he hopes the increased awareness of infection control prompted by the pandemic could lead to a change in attitude towards the devices in our pockets.

‘We’re in the midst of of a pandemic where public health literacy about hygiene measures has increased dramatically,’ he said.

‘It would be helpful if mobile phone use was part of that health literacy.’

newsGP weekly poll
How often do you find something clinically useful when checking a patient’s My Health Record?